Charlotte Street on the Theory of the Fragment: Rilke.
Interesting, but I'd tend to disagree with Mister Rilke: I don't think everything should be transposed into things. We have quite enough. The "fragment as enigmatic object of melancholy contemplation" -- now that's something I can stand firmly behind.
Posted by: E. / 7:13 PM A google search for "Maggie Cheung" brought up about 3,320 results. It's quite possible that I'm infatuated; either with her or simply on a binge of Asian cinema. I'm a fool for waiting until Hero was out of the theaters; it's still quite good on DVD, but on a big screen... But mostly, though, I'm kicking myself for ignoring Wong Kar-Wai's work for so long. As Tears Go By is one of those first films that shows a lot of potential and works, at times, despite itself: it looks like a HK version of Mean Streets with New Wave touches, but the love story is at once incongruous (until neat flashback in the final scene) and rather poignant. Good lord, I verge on mawkishness at times... and never more so than on Days of Being Wild. The pre-credit sequence is stunning, as is Maggie Cheung's rainy night confession / conversation with Andy Lau. I dozed off to it last night, and woke to a driving rain that has lasted most of the day. Two writing projects in various stages of process cross from notebook to notebook to index card to floor; two more hover at the margins. And I just wanted to watch it again and again. 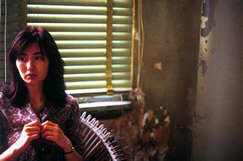 Presence, hesitancy; there's a sort of compactness to her performance that makes me realize why a look or gesture, even a "mere" or "simple" one, can hold one for hours after the picture; how in real life, a look or gesture can provide the material for an entire book. And, of course, aside from her cinematic glances, "Maggie Cheung" is a movie star, endlessly photographed, marketed, idolized. In reality, I'm sure she has bad hair days, silent moments, mornings when she wakes up, it's raining and nothing seems right, breaks a tea cup -- and, perhaps, looks at the form of the fragment and its shadow, and something crosses over her, not acting, a shadow crosses her face:
"The image of the dream marked the end of the dream, and the memory of the dream." -- Jacques Roubaud, The Great Fire of London
Posted by: E. / 5:37 PM

Last week, R. made a remark to me about a "felt hat," wch left me perplexed. He was referring to a poem from Bataille's Divine Filth: Lost Writings, wch he thought I would know. Having since had a look at the book, I agree with him -- worth glancing through, but not worth buying. Two prose scraps, fragments of poems. The fragments, set in type in a field of white, for the most part look too much like "poems": there's no momentum, nor do they function as interesting objects; they don't cohere or open up -- nor provoke the sense of vertigo fragmentary works so often do. It would have been nice to see some holograph pages -- a look at the books in wch GB wrote, his handwriting. Sadly, no. Unlike the notebook writings of On Nietzsche, this book confuses product with content, provides little & seems to be scraping at the bottom of the Bataillean casket. The aforementioned poem is worth quoting, however:

Writing on Leiris and Barthes in the current issue of October, Denis Hollier "Notes (on the Index Card)" writes:
"But they share another common feature, one that may be more anecdotal, more contingent: both left an impressive volume of index cards. There are 399 cards filed in Leiris's box for La Regle du jeu and, according to Nathalie Leger, one of the curators of the Barthes exhibit at the Centre Pompidou in 2002, there are 12,250 slips in Roland Barthes's bequest at Institut Memoires de l'edition contemporaine (IMEC).
Posted by: E. / 8:37 PM

Reading the other night with Susan Clark. From the end of the bibliography of her as lit x: the syntax of adoration:

I've been away. It's been good. It's good to be back. Like it's almost summer. Too much damn daylight.

.
Sounds at night, and early in the day. & throughout. It comes as little surprise that one can learn more by listening.
Posted by: E. / 6:53 PM