Ran to the store and bought a new pocket Moleskine and a larger Clairefontaine notebook. It’s an old, and adopted habit: Woolf began each year with a new journal.
These are the dark days of the year: last week, a friend said “they tell us that it’s getting lighter, but I don’t believe them.” This is the time of year, I think, when people should be putting lights up rather than taking them down. January and February have a dim, barren quality that is sometimes aesthetically appealing, sometimes defeating -- as is the blank page. Cold and stricken, this notebook page is already filled with cross-outs and deletions. Let the question be a comfort, I think: let the eyes rest on the blank spaces.
Posted by: E. / 11:11 PM

A thread lost track of, passed over in the process of weaving; it’s later clipped off and discarded. Its absence creates a flaw which makes the fabric beautiful. What then of this solitary, stray thread?

"His near stammering. With disconcerting promptness one word hid behind another."
- Maurice Blanchot 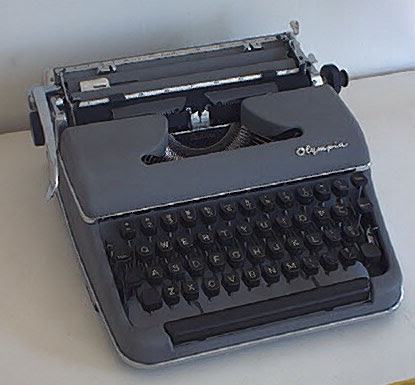 "Despite all the hype, Remington did poorly with its new product. Out of an initial run of some one thousand machines, the company sold only four hundred. For one thing, people found the new invention too odd, too cumbersome, and too disorienting for daily use. But what turned most people away had to do with its most curious feature: The keys struck the bottom of the platen, on the underside of the paper, preventing the writer from seeing what he or she had just written. Here was blindness piled upon blindness, for while the author, under the best of conditions, can never see the reader, he or she could at least survey the sentences as each word came into view."
- Barry Sanders (click here for article in full).
Posted by: E. / 10:10 AM

The object-hood of things, even of words - even if metaphors. Or seen as such.

The distances.
Or merely distance.

All conversations eventually come round to Hegel. Or they don’t, but tonight’s did, with B. extending the triad: Thesis. Antithesis. Synthesis. Kraftwerk.
Posted by: E. / 11:40 PM

I was walking late at night and came across a park; floodlights lit up trees in the foreground, behind which a hill fell away into a deep ravine. The brightly lit foreground gave the illusion of a greater depth beyond. Not depth: abyss. So it is with writing, I thought later. But in the moment, light-struck, as a moth fixed on a screen, I froze for the moment. The trees exaggerated the darkness beyond while holding it at bay. Suspension. Something welled up and emptied somewhere in the hollow of my rib-cage, near the spine. Something rose, and washed out of me. It was late, and a good deal of this had to do with exhaustion, likely frustration. Something else, too, wch I cannot name, only detail some of its effects. I heard the wind in the pines. The cigarette burned down near my fingers in a hand, slack at my side. I moved on. I wandered home, colored lights dotting the way.

Of my friends and those whose writing I read, what joy the phrase “I have a project” provokes in me! Even if halting, if provisional. Aware, too, of the traps of announcing something, perhaps too far in advance. Better, I think (as applies to my own case -- perhaps I shd be more forthcoming?) -- to announce something is finished, or that something has happened. You may know the space I write of. Sometimes it comes of a trip, or a period of gestation brought on by reading, or viewing. But it is gratifying to know that there is someone who has made a pact with the work, or it with them. They’re on the precipice, facing that abyss. There is some sort of movement... figure, ground; subject, object; reading, writing: the words shift back and forth, and between one and the other there is a space of possibility. Sometimes nothing is said, after such a confidence is made. The promise of work / the promise of the work.
“Something...”

What I wanted to write, what I intended to write here, in part a response to blah-feme’s post (linked below)-- is some sort of affirmative statement. I have woken up in the middle of the night, for no apparent reason. I have burned pages, cut them out, I cross out on a daily basis. There is a turning away from something and a turning to something else. Unhappiness, or grief may be at stake. And what does one do with -- or in -- such a state? It absorbs you, or it finds a home in you. “Our doubt is our passion, and our passion is our task.”

Perhaps, I thought, I should transcribe something I found relevant from Mladen Dolar:
“‘[T]here are more important things than childhood’: this is one of Kafka’s great sentences, it should be taken as a motto, or indeed as a most serious political slogan. A political slogan in our time of a general infantilization of social life, starting with the infantilization of infants, a time which loves to take the despicable opposite line: that we are all children in our hearts, and that this is our most precious possession, something we should hold on to. There are more important things than childhood: this is also the slogan of psychoanalysis, which indeed seems to be all about retrieving childhood, but not in order to keep this precious and unique thing, but to give it up. Psychoanalysis is on the side of the young dog who decides to grow up, to leave behind ‘the blissful life of a young dog,’ to start his investigations, turn to research, pursue a quest.”
-- Mladen Dolar, A Voice and Nothing More, p. 182. [one elision mine]

“The days of phrases are over,” Edgar -- whose quest, whose project is a cantata, or a novel, a play, an opera, a film -- states elsewhere in In Praise of Love. In Praise of Love, a film of phrases, of intertitles stating simply “something.” To say “the days of phrases are over” -- I would like to think not. No need to call it a project. “Something.” Even that. The quest may be a phrase.
Posted by: E. / 11:11 AM

A friend pointed out this post of blah-feme's. I'd like to respond to it in some way, but a link will have to do for now.
...My first post of December. Good lord, the time. Not blissed out on closures; awash in too many openings. Drifting. Working. Not entirely unpleasant. But now, I feel a digression coming on. I'll leave off, as I do with so many e-mails and letters: "more later."
Er, right.
Posted by: E. / 2:53 PM