To feel time gone by, & the suspicion that one has changed for the worse. Lunar eclipse tonight, watching the moon turn dead in the weak hours of the night. Conjured up all the ancient, horrible things. Silence and the edge of terror in the small hours. "The noise at the threshold of the voiceless silence," as Rilke put it in the Notebooks of Malte Laurids Brigge. How many years have gone by since I last read that book in full? Yet it's still with me. ...3am, and working at a project not touched in a couple of years. Things cycle through. Some continue to haunt. Late night -- seeing the Pleiades; sometimes counting helps. Feeling the light go out.
Posted by: E. / 3:44 AM

a brief note on absence

On the walk to work today, I reflected that I haven't sat down and written anything at length here in a bit; then, that writing from work generally imparts an acid tinge to any post, and I'd be better off not to. But, while internet fuguing, I came across a Miranda July reference and the memory of having seen her wretched You and Me and Everyone We Know came back like an acid-reflux flashback. So there. More harrowing than any blood-bespattered K-horror movie, from its opening let's-make-fun-like-Ro-bert-Ash-ley vocalizations to its So-Cal suburban thriftstore aesthetic, its knowing, trans-ironic smugness... oh, just ugh. In retrospect, I think I'd rather get hit in the head with a hammer. Again. A late late reply to a travesty of a movie, I know -- but, my god, the practical violence of twee.
Perhaps this digression is just a way of avoiding entering into any sort of engagement with popism, or its debates, except to note that I think k-punk, in writing: "...Greil Marcus apart, I’ve never really tuned into much American pop criticism at all, which in my no doubt far too hasty judgement has seemed to be bogged down in a hyper-stylized faux-naif gonzoid mode that has never really appealed to me" -- nailed it right on the fucking head.
That being said, I'm curiously enjoying some damn Feist song that's been running though my head. There's no temptation to intellectualize this pleasure, but neither do I feel any urge to supervalidate its sensual experience over any other aspect of experience. Wch is the trump card so-often played by popists.
Apologies for the pseudo-gonzoid tone of this post. I'll leave off with an amusingly perverse sight from my morning walk: a dozen or so crows and pigeons in the street, feasting on a spilled bag of cat food.
Posted by: E. / 3:44 PM 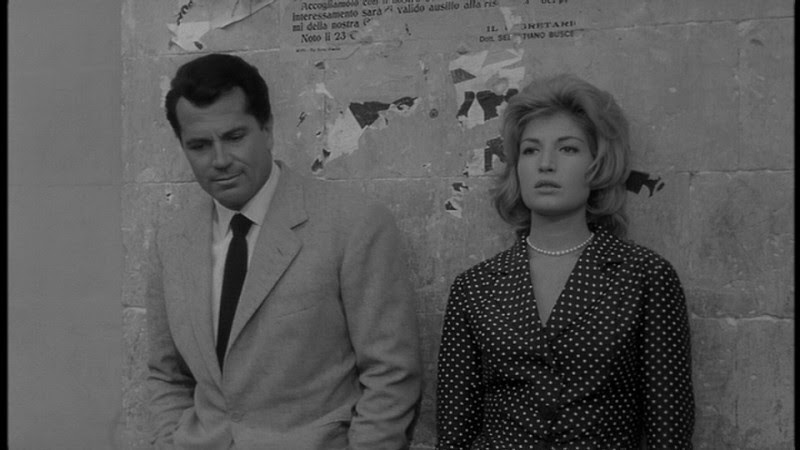 What cannot be said...

must be passed over in silence.

I came home last night to check my e-mail and read that Michelangelo Antonioni had died; strange, as I had been thinking of L'Avventura earlier in the day. [How I always seem to map parts of it onto Ann Quin's Passages]. At Bergman's death, I barely lifted an eyebrow. But something very much like sadness, today....
Posted by: E. / 8:11 PM