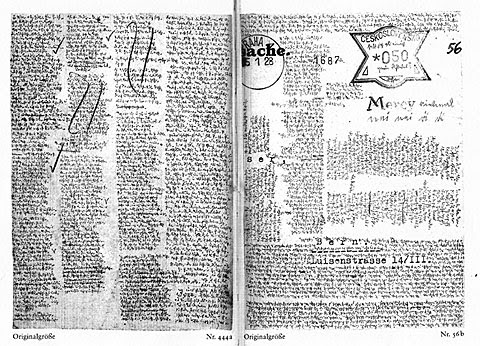 Posted by: E. / 12:12 PM
Robert Walser, who had abandoned writing for the asylum, went on a walk Christmas Day, 1956. Children at play in a field found his body as if he had laid down to rest; Robert Walser, dead of a heart attack, a light snow falling on the scene.

Between snowflakes and leaves there are resemblances. At the sight of snow falling one thinks that one is seeing small flowers that are falling from the sky. Why is foliage dying in the autumn secretly golden, and why does one think of springtime flowers having tongues, to shape some kind of conversation? Seeing leaves one thinks of hands, their finger-inesses are budlike. Birds’ feathers, leaves on a tree, the delicate, feathery, fingery snowfall in winter -- one rightly tells oneself that they are related. The wind seems to be an undependable blunderer; its lull is as sweet as compliance, blissful in itself, flowing round itself, feeling itself beautiful. Does the wind feel that it is windy? Does the leaf know how beautiful it
is? Do the snowflakes smile and do flowers charm themselves, and do curls know their curliness? A river in its motion resembles a limber wanderer in a hurry,
the watery mass of a lake in its repose a beautiful woman in white gloves, with blue eyes. The profusion of leaves hides the enchanting finery of the branches. It is a pretty thought that pretty things exist. The shapes of waves and branches are snaky, and times do come when one knows that one is no more and no less than waves and snowflakes, or, as it certainly longs now and then for release from its uncommonly graceful confines, the leaf.

He shakes his head, puckers his lids, his lips... “No, positively no, that won’t do.” He stretches out his arm, bends it again... “I tear out the page.” He clenches his fist, then his arm drops, his hand relaxes... “I throw it away. I take another sheet. I write. On the typewriter. Always. I never write by hand. I re-read...” His head moves from side to side. His lips are pouting... “No, no, and again no. I tear it out. I crumple it. I throw it away. And so three, four, ten times I start over...” He pucker his lips, frowns, stretches his arm, bends it again, lets it drop, clenches his fist.

And now she, his self-effacing mate, is staring into the distance contemplating a mental picture... “The entire study is strewn with it.” She is speaking very softly, in a colorless voice.... “He throws it on the floor. He comes out reeling. Sometimes he is dripping wet. When you speak to him, he doesn’t hear you.”

His arm is like a joined metal rod that folds and unfolds. I tear it out. I crumple it. I throw it away. The rod bears down, digs. The repeated gesture becomes engraved. Again. Again and again. I take a new sheet. His fingers are tapping. On the white page words and sentences form. Miracle. How do we do it? It’s a great mystery. His eyes move from line to line, he shakes his head. No, and again, no. And so I toil day in day out. Sometimes I awake in the night, I question myself. What is the use of all this struggle, this endeavor? Why, in heaven’s name, for what?

5 1/2 x 8 1/2. A sense of loss is pleated, crumpled,
then pressed onto the page,
texturing the bond with shadowy lotteries.
Is it shredding or building: neutral, engaged,
morph and/or decay?

Yes.
The condition of being
under the changeable sun in the,
although smallish to us, vast
and lustrous spaces
of accidental time, lithic
melancholy,
and milky wrinkles
is--what it is.

a cut becomes the wound, gives way to the scar, wch, in time, fades. So it comes as quite a shock when, from deep beneath the surface, the initial spasm flexes itself once again...
Posted by: E. / 1:11 AM

A day or two after the snowfall, gravity wins out: the crystals coalesce, the snow collapses on itself. The snow is tired. Holes appear, the white shell recedes into crusted edges; the uneven lines of the shingled rooftops affirm their unyielding form from below. The pattern, the sheet, the ragged edge,

In the morning, standing on the fire escape, I hear the sound of a jetliner, wch barely registers. Sometimes the sound, like that of a train whistle, brings up an immense longing to move, be elsewhere. But this morning I’m simply content to stamp my feet in the snow, in the stillness in the wake of the plane, & feel the low sun on my face. And then, after some time has transpired and my thought has drifted on to something else, my eye catches what I take to be a star amidst the blue sky. This bright tiny point is the plane, banking, catching the sun, already well over the mountains.
Posted by: E. / 8:43 AM

A gesture. No, not the gesture, but rather what lies beneath it. The subtly shifting mood or sensibility beneath a phrase; a stress, a minute thing at the center. And a name, held like an object, like a stone in one's mouth. Nathalie Sarraute.
Posted by: E. / 11:59 PM
Walser, Celan, Flaubert, Proust, Kristeva, Pascal, Bachmann, Genet, Green, Beckett. Henry Brulard. I run my fingers along the edges and spines, set them in stacks, in rows. I square my shoulders, straighten my spine. There's snow on the ground and in the branches, the moon just visible between the clouds.
Or: Tulli, Kafka, Oppen, Leiris, Mansfield, Howe, Redonnet, Nancy, Barthes, Sollers, Austen. Walser: The Walk. I move from shelf to shelf, stack to stack to table, hoverring, settling, ordering. Again: Tropisms. Martereau. The Planetarium. The Age of Suspicion. The Golden Fruits. Between Life and Death. The Use of Speech. Here. Lists come easy. And in the ease of making a list, one realizes that they catalogue not so much accumulations or accomplishments, but deficiencies. And the overlooked, uncredited -- something that, through accident or intention, escapes. The moon -- here, then gone again.
Posted by: E. / 11:41 PM

he was right: people

don’t change. They only stand more
revealed. I,
likewise

On 27 October, No Answers wrote:

There are no answers, only choices.

On this note, I think this blog has said as well as it was able what it was it wanted to say, and so this will be my final post. [...]

I bookmarked the page, meaning to go back and read the blog from the beginning, now that it had reached and ending. When I returned to it, I see that another choice was made.