Today's the anniversary of Virginia Woolf's birth, and the fifth anniversary of this blogwriting project, notebook, cache of loose ends, loose threads...
Looked through the Diaries this morning, hoping to find a quote for this date -- a good thing about dating things, using the day as a random way of cross-sectioning. But I will fall back on an old favorite:
"But according to Montaigne, one is various. I can't lay down a law for my feelings." -- V. Woolf, 12.I.1924

Tagging entries wasn't an option when I started, and I haven't felt the need to introduce them; however, some possible categories might be:
misreadings; vagueness; the hardness of objects; light; doubt; writing; dust & residue; memories; anti-memories; clouds, mists & vapours; stones & pebbles; pellicula; accidents & occasions; various seas; ellipses
Posted by: E. / 11:11 AM


the sublime is the ring

from the pebble out--

Let’s call this a diary, then. Register [of] bleakness. The broken ceramic bird cradled in a nest of papers on the desk, the fog that moves outside like smoke. Past recognition... Or: Past. Recognition. Once could stop at any point. A sort of stutter. “The stutter is the plot” (Susan Howe, quoting— Olson on Melville?) The stutter, the full stops, ellipses. Marking. The end of a digression. The beginning of another. Vast spaces within each moment. Each word a hard object (objection), encrusted on the interior of another. And the surface of this sense?
The mist lifts, the dew dries, and the webs become invisible once again; the moths, too, are dormant.
Posted by: E. / 8:21 AM

A line is drawn along the passage; a question mark placed in the margin.
Posted by: E. / 11:11 PM

"But in what sense can we say that those two times, the past and the future, exist, when the past no longer is and the future is not yet? Yet if the present were always present and did not go by into the past, it would not be time at all, but eternity. If, therefore, the present (if it is to be time at all) only comes into existence because it is in transition toward the past, how can we say that even the present is? For the cause of its being is that it shall cease to be."
--St. Augustine, Confessions
Posted by: E. / 11:11 PM

mist] Writing this longhand because I don't want the noise of the hard drive, even. Occasional raindrops fall -- not as rain, but from the nightmist that has condensed at the ends of tree branches, until gravity breaks the surface tension, the skin of the water droplet. Tiny fixed points of light.

recollection] "See what was..." I was in Cleveland, a night a long time ago, drove up to see some band or was with some band & we stuck around after the show, two of us finally getting into a van, one of the last in the parking lot, down in the Flats, next to the river, a light rain falling or a mist in the air. Amazing to be down among the steel mills, 3am or so, turning on the engine and the radio comes on with it and it's The Fall's "Garden" -- and the two of us just sitting there, not moving for the duration of the song, looking out at the fog-veiled lights on the bridges.

receipt] A few weeks ago I received a receipt in my mailbox for a package left at the post office, something I had to go to the post office to sign for, or pay postage due, who knows?-- I was expecting no packages, though this was the holiday season. When I went to the post office, nothing could be found, despite lengthy searches by two clerks. I was allowed to keep the receipt, some small, rain-wrinkled document of a failure of the system, a blank marker impossible to cash in.

journal] I debated buying a diary this year. I find the pocket-sized Moleskine page-a-day diaries can be useful; I can get about 150 words per page (script creeping toward the Walserian) -- but I've found it to be enough to sketch out what's necessary, working out a few ideas, a few rightly set sentences. And it enforces a sort of discipline -- esp. in regards to writing at night. I seem to have this mental block / fixation that only the morning hours are productive. And that something ought to change. The diary sits on the desk, still in its shrinkwrap. Technically, it's not blank because it remains unopened. It remains a possible object.

necessity] Is this necessary? Is this enough? I think there was something else, something that occurred to me earlier, outside in the mist, composing this post as I wandered down the alley. An unusually warm evening (hence the mist). A moth flutters around a bare lightbulb on the backstairs. The night the stairs the light the moth, the breaking drop, the matted leaves. Backdrop of night; not eternal night, not eternal light, but an occcasional moth. That'll do. 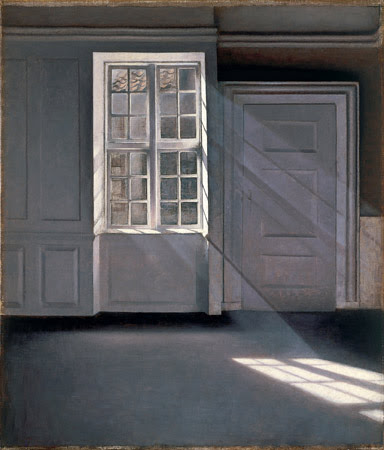 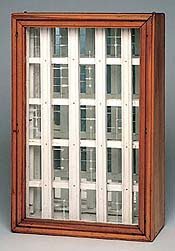